CRRRRUCKT-plop.  The sound of a rotten egg imploding in my hand.  Urgh!  Try. To. Avoid. Spreading. Smelly. Goop. Everywhere…………… END_OF_DOCUMENT_TOKEN_TO_BE_REPLACED

Thursday 7:00am red sunlight reflects off the boat windows as I walk down the pier, still soft from a half risen sun.  I return to Dizzie from my morning run to find two kids END_OF_DOCUMENT_TOKEN_TO_BE_REPLACED

We look out over Syracuse bay with the tourists enjoying the cool of evening.  A boat comes in to anchor in the fading light.  END_OF_DOCUMENT_TOKEN_TO_BE_REPLACED

We sit in the cockpit watching the disturbed seas. Whirly whirly’s form and dissipate. END_OF_DOCUMENT_TOKEN_TO_BE_REPLACED

4am. Sleep and I are yet to meet. END_OF_DOCUMENT_TOKEN_TO_BE_REPLACED

We pull up to the marina gate, it’s 8pm on Friday night and Justin’s been driving for 2 hours, both kids are asleep. END_OF_DOCUMENT_TOKEN_TO_BE_REPLACED

It’s 9:45pm and I’ve been standing in a hospital hallway for five hours. END_OF_DOCUMENT_TOKEN_TO_BE_REPLACED

Finally Dizzie is in the water!  Now to face reality that a Mediterranean winter is looming.  We sure don’t want to spend it stuck in Port Saint Louis.  So the mission is to find somewhere nice to hang out for seven months. END_OF_DOCUMENT_TOKEN_TO_BE_REPLACED

For two months Justin and his dad and worked non-stop to make Dizzie a safe and liveable home for us.  What could take them so long you may ask?

Stop, grab yourself a cup of your favorite poison and settle in – it’s a looooong list.

1. Remove teak deck. First they removed fittings on the deck, then ripped off the old teak, scraped off the sticky mastic underneath and cleaned the deck with acetone. This involved removing 1000’s of screws and filling the screw holes with epoxy by syringe, sanding, filling and sanding again, and again.  Then they put the fittings back on the deck.  Finally they taped the deck and painted with primer, undercoat and topcoat then re-taped and painted non slip.  This job alone took two people about one month or 350 man hours.

The teak, the mastic and the clean deck 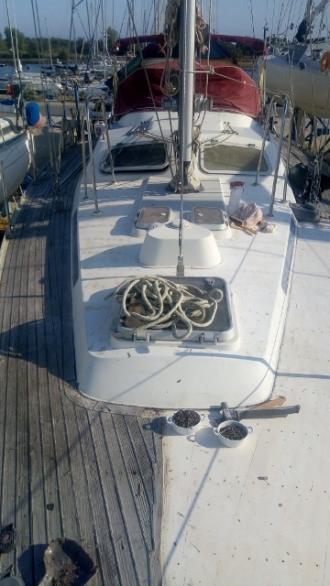 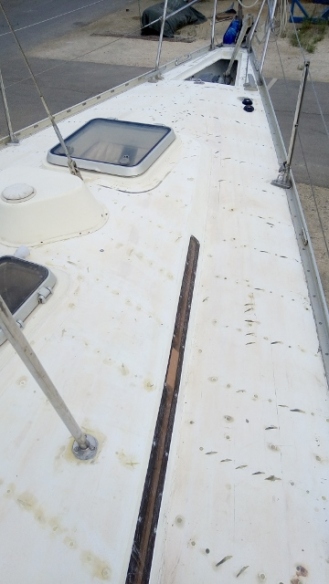 Deck half cleaned; an example of all the holes they filled; and the final product – kid approved.

2. Replace 30 year old original engine with a new Beta 60 engine (done by a contractor). A good move as when the engine came out, it was badly corroded internally. 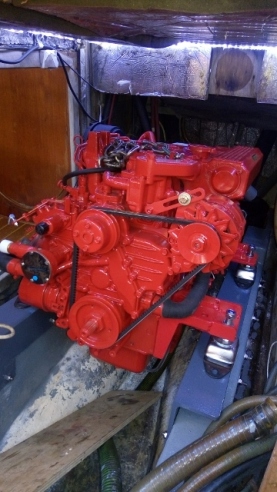 Out with the old, in with the shiney new red engine.

3. New propeller, cutlass bearing (hollow rubberised tube that the prop shaft spins inside of), and coupling (the bit that joins the engine to the prop shaft). 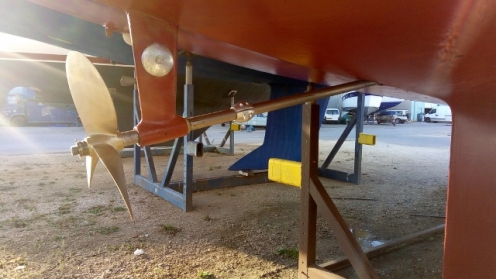 4. Paint bilge (the hollow low parts of the boat where water leaks end up, internal or external)

5. Install a new bilge pump (to remove water from bilge)

7. Replace all the seized water system valves (valves that connect the three water tanks to each other) and remove redundant valves

8. Replace steering cables (that connect the steering wheel to the rudder).  One had nearly broken through all strands (well spotted by Justin). 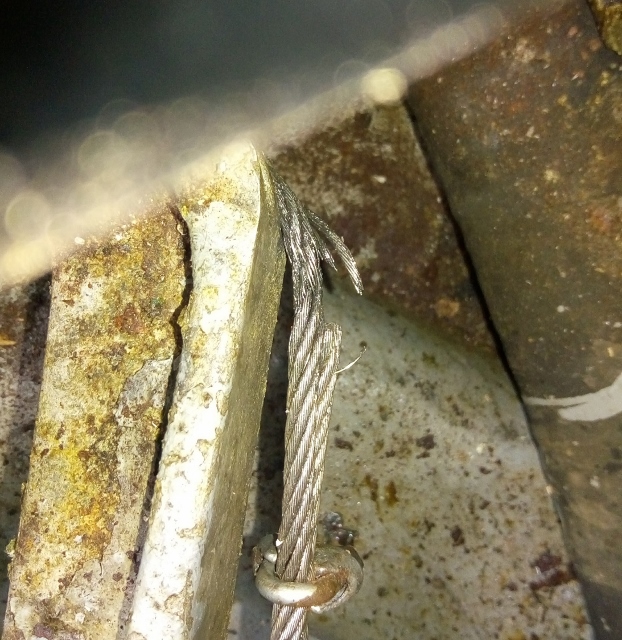 The steering cable in the dark corner of the lazarette locker 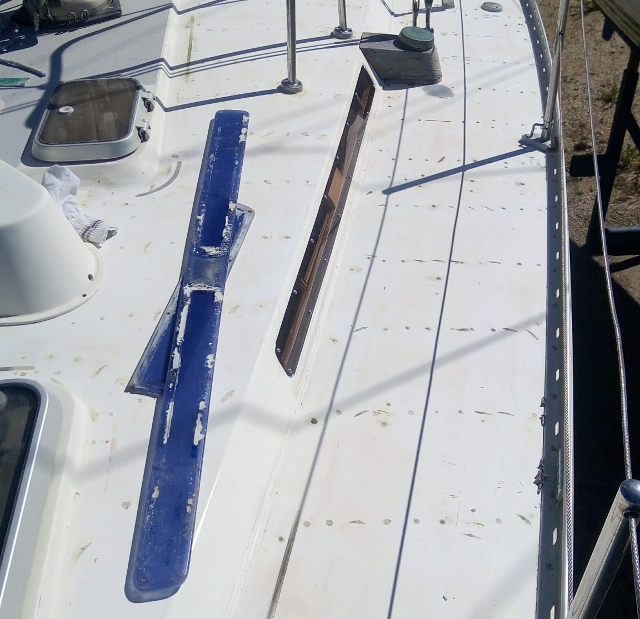 Out with the old blue leaky windows, in with the new tinted windows

10. Replace 3 Halyards (ropes that pull up the sails)

11. Service all the seized Blake seacocks (seacocks are valves in all the underwater holes in the boat – you definitely want them to work!)

12. Fixed one leaking seacock and skin fitting (the skin fitting is the bit that holds the seacock in position)

13. Remove old rusty gas boiler.  Speaking of boiler, hows that cuppa going?  Time for a refill?  Go on, treat yourself, in fact, while you’re in the kitchen, grab a biscuit too.

15. Clean fuel bug out of the diesel tank (fuel bug is a bacterial colony growing on diesel – must be removed)

Justin looks way too happy cleaning the fuel tank.  (Can you get high on diesel fumes?)

16. Find a sail maker to repair the Genoa (the front sail) because the clew had been ripped off sail (that’s the corner attached to ropes).

17. Replace Mizzen sail (the sail on the little mast) with brand new one that we found on the boat.  Bonus! 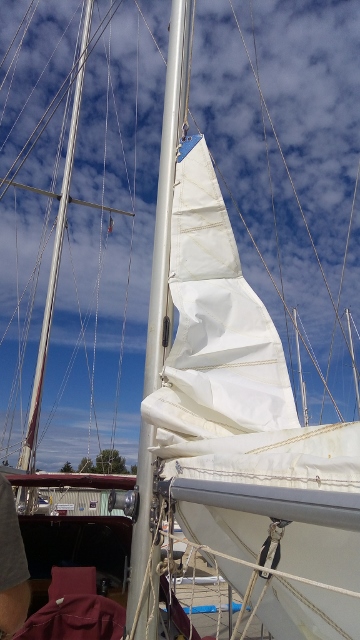 18. Install a hand controller and new foot switches for windlass (the powerful winch used to pull up the anchor and chain)

21. Replace anodes (bits of metal stuck on the boat to prevent other boat bits rusting)

22. Paint 2 coats of antifoul below the waterline (to discourage barnicles growing on the boat)

24. Replace the hot water clarifier pipes (the pipes that run through the engine and make us hot water)

25. Climb the mast to check rigging (wires that hold the mast up)

Justin up the mast.  He doesn’t look scared at all.

26. Remove old redundant electrical wiring – tip of the iceberg, lots more to do

28. Fill a bubble in hull with epoxy and repaint

29. Sand and repaint a section under floorboards where water had been sitting

30. Rewire a faulty navigation light at the bow (front of boat, you knew that one didn’t you!)

31. Rewire many loose connections in lights

32. Make a ladder for Kynan’s bunk 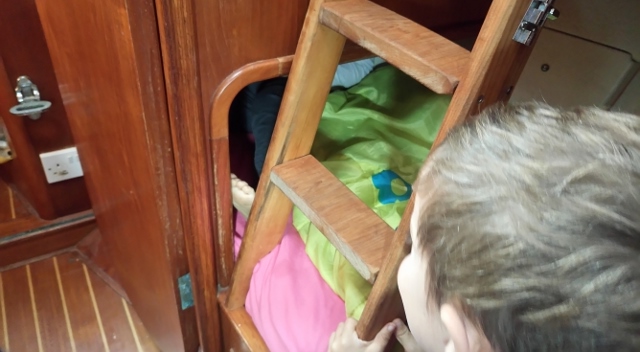 Ladder (foot again present for scale purpose; ps. foot is 3 years old; pps. yes, there is a 3yo attached to that foot somewhere in there)

Phew!  They were busy!  And you, if you’ve read this far, must be ready for a loo break.  Off you go… 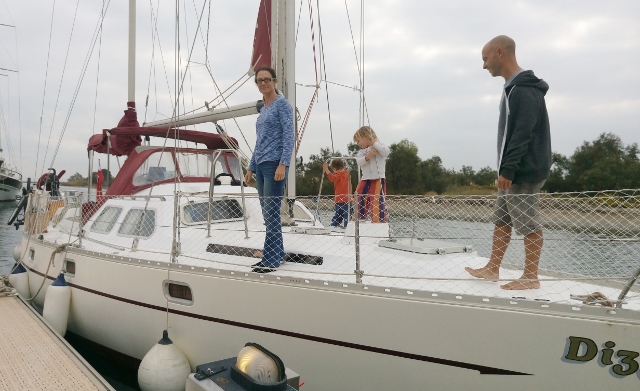 I blinked, and in that moment I was plucked UFO-style from my life.  I looked around to see a a completely new reality. END_OF_DOCUMENT_TOKEN_TO_BE_REPLACED